Recent research commissions have meant that I have been spending a fair bit of time at The National Archives. I have turned up plenty of fascinating material - fascinating for me as well as my clients - but a brief comment in one document stands out above all others, and I think it worthy of transcription here:

'I would like to place on record the fine behaviour of Deck Boy Triggs. This boy was only sixteen years old, and was making his first trip to sea. When the lifeboat capsized, Triggs, who could not swim, clutched A.B. Chalcraft, for support. When he found he was pulling this man beneath the water, he deliberately released his hold and was drowned. His unselfish action undoubtedly saved Chalcroft's [sic] life, but at the sacrifice of his own.'

I am not sure if I can, or even should, try to articulate a response to this brief but immensely powerful statement, and so I have decided to try and establish who this boy was and whether there are any family members alive today: I think that if they don't already know about this they might like to hear about the bravery with which their relative faced death in the North Atlantic 60 years and more ago. Initial enquiry suggests that this boy was one Alfred George Triggs, a son of Herbert and Ellen Triggs of Brentford, West London. It will take further research to confirm this and sketch out a rudimentary family tree, but this is a project that I will return to when time permits and update this blog if I find anything further. 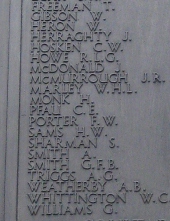 So it looks as if I was right about this. The name of A(lfred) G(eorge) Triggs appears on the great monument at Tower Hill to the men of the Merchant Navy who died at sea during the two world wars. No further details about Alfred or his family are recorded on the monument itself, of course, but I'll see what I can do to add some more information in the coming weeks.
Posted by Dr Andrew lewis at Monday, April 30, 2012

In case you're wondering, the title of my blog comes from the still-mighty Captain Beefheart's 1982 LP Ice Cream for Crow. Often viewed as merely a footnote to the Captain's career, it's one of my favourites.