The working-class autodidact: fact or fiction?

We can get this one out of the way easily enough: don't let anyone ever tell you that the working-class autodidact was a creature of myth. The breed may now have become all but extinct, gone with the particular social cultures of the heavy industries that produced them, but we can still glory in their achievements. How about this for a superb example, uncovered whilst looking at early 20th-century trade union reports among the TUC collections at London Metropolitan University Archives. 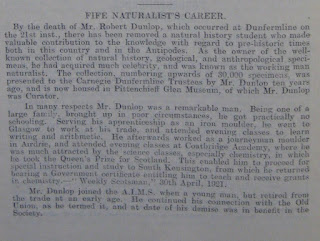 National Union of Foundry Workers, Monthly Journal and Report, May 1921.

Why did these industrial cultures - so primitive, limited and limiting in many respects - produce outstanding men such as Robert Dunlop? My own view - based, I sometimes despondently think, more on blind hope that sufficient evidence - is that the desire for knowledge and self-improvement is simply an eternal verity of human nature. But perhaps a more pertinent question for us to consider in our time is why we don't seem to have our own Robert Dunlops: surely somewhere out there, enduring and rising above the petty miseries of call-centre, zero-hours contract Britain, are his 21st century equivalents. For what it's worth I think that they are still with us, but whether they will ever be recognised by a culture that does not seem to revere knowledge and intellectual prowess, let alone be celebrated by future generations is debatable.
Posted by Dr Andrew lewis at Tuesday, May 02, 2017

In case you're wondering, the title of my blog comes from the still-mighty Captain Beefheart's 1982 LP Ice Cream for Crow. Often viewed as merely a footnote to the Captain's career, it's one of my favourites.